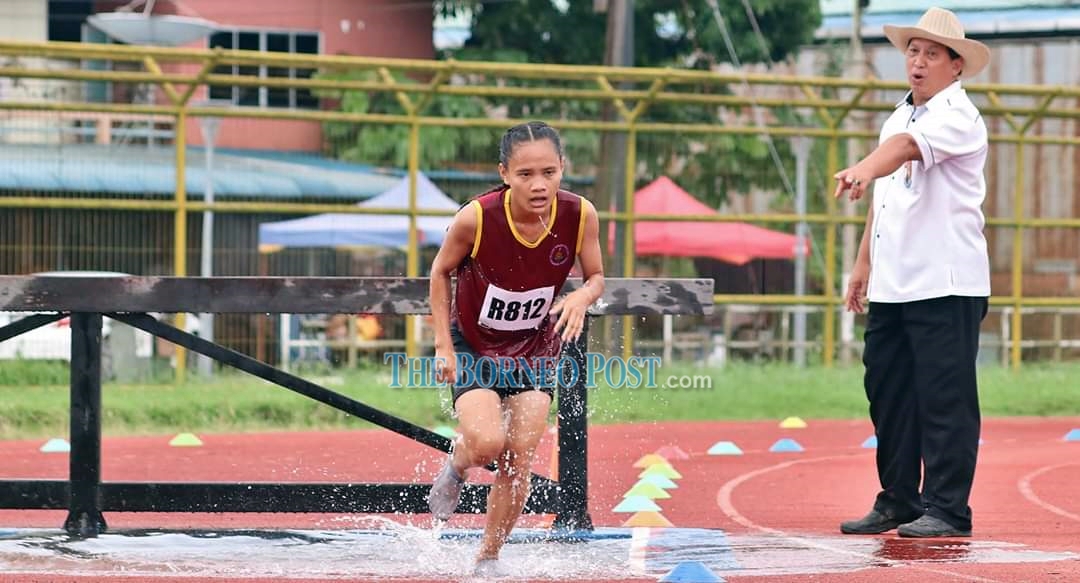 SIBU: State long distance runner Lvy Nayan Banyah believes that her small stature will not be a disadvantage when she makes her Malaysia Games (Sukma) debut in Johor next March.

“I will eye for a podium finish to prove that size does not matter so long as one has the will and the determination to win,’ said the relative unknown Bintangor lass.

Standing at 153m and weighing only 39kg, the 16-year-old Form Four student of SMK Bandar Bintangor is expected to be fielded in the 3,000m steeplechase and 5,000m events at Sukma Johor.

She will be out to prove her reputation as Sarawak’s best long distance runner for the U-18 category in recent years.

Sarawak’s forte is in the throw events in Sukma but when it comes to the track event, Sarawak athletes have rarely had a podium finish.

Her coach Ahmad Mizuan spotted her talent and immediately roped her in for the programme.

“She is hard working, disciplined and is willing to sacrifice her time to do what is best for her,” he said.

Mizuan believes Lvy is yet to reach her potential and given more time, should be able to explode into the scene with a big bang.

“Never mind her petite size. So long as she has the speed and the strength and power behind her limbs, she should be able to make it.”

Lvy makes her cross country debut at the age of 14 when she took part in the U-15 category of the National Cross Country run held in Negri Sembilan in 2018 and got 18th.

Last year, she took part in the U-15 category of the 2019 Malaysia Secondary Schools (MSSM) cross country in Putra Jaya and finished 7th.

Unfazed, the girl continued to train hard and in early March, she returned with a third placing in the U-18 category of the 2020 Malaysia Secondary Schools (MSSM) cross country race held in Putra Jaya.

Her results kept on improving but Lvy admitted it was nothing to shout about.

She rewrote the 2,000m steeplechase event with a new time of 7mins 51sec, enroute to emerging the best girl in her category.

Last year, she took part in the Athletics Development Track and Field Championship in Miri and won the gold medal in the U-15 2000m steeplechase with a time of 8 mins 21sec

However, her most memorable outing todate is the Sibu 21km Half Marathon U-18 category when she surprisingly lifted the title after destroying several of her stronger opponents.

“The feeling was so great then and my performance inspired me to go for more.”

Lvy is now looking to her coach to help her overcome her obstacles and her dream pursuit in Sukma Johor.

“I know it is not easy to face all my challengers but I should be able to rise on the occasion when it matters most.”

Lvy has been training for about two and half hours daily before her training was brought to an abrupt end due to the Covid-19 pandemic.

Since then, she had been forced to do light exercises and strength conditioning at her village in Bintangor.

With the country entering the Recovery Movement Control Order (RCMO) stage, Lvy hopes to be able to start training soonest and to pick up from where she left.

The post Bintangor lass to prove size does not matter in steeplechase at Sukma appeared first on Borneo Post Online.