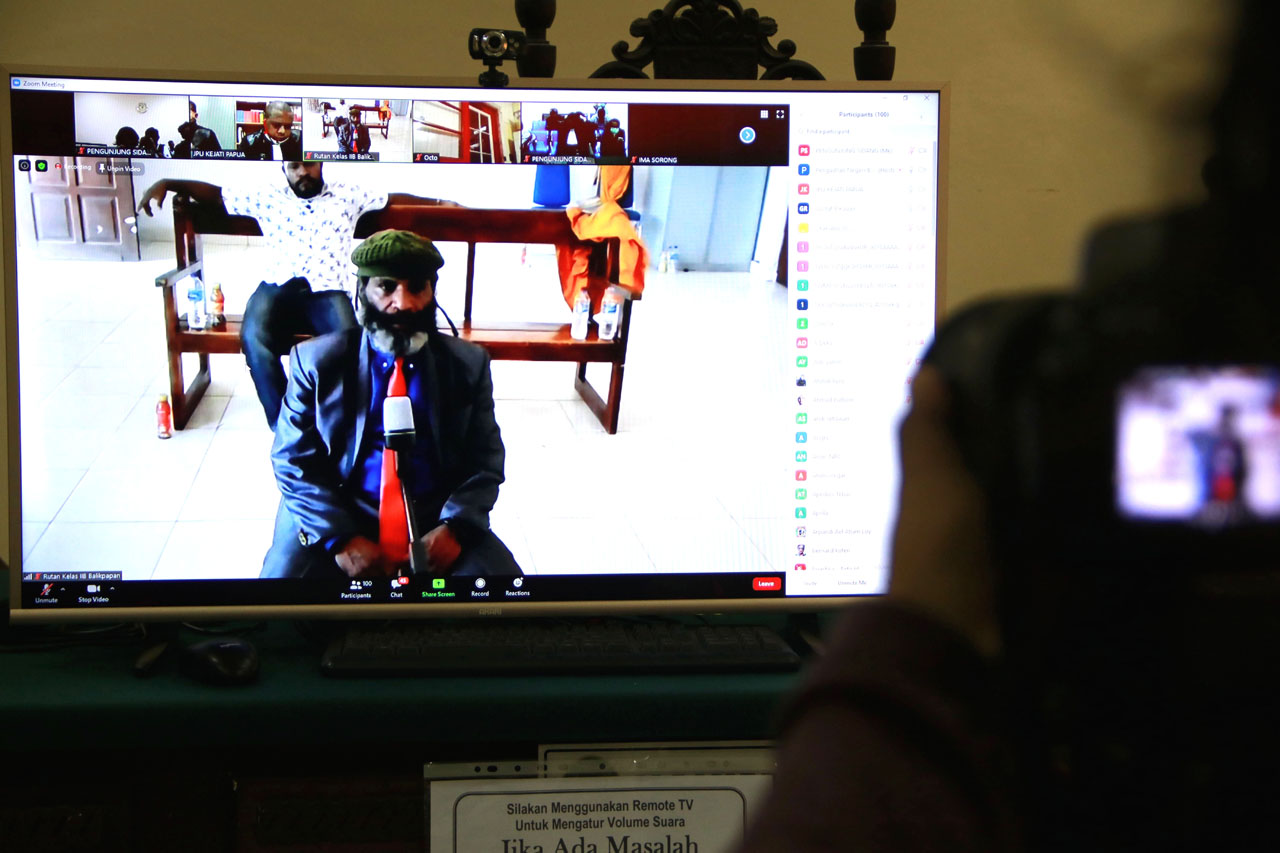 Tabuni is seen on a monitor at a separate location due to the Covid-19 coronavirus outbreak as he sits in the dock during his trial in Balikpapan, East Kalimantan. — AFP photo

BALIKPAPAN, Indonesia: A group of Papuan activists was jailed for treason by an Indonesian court yesterday over anti-racism protests last year in a case that sparked fears of a clampdown on free speech.

Unrest erupted across Indonesia’s easternmost territory and in other parts of the country in August after the arrest, racial abuse and tear-gassing of dozens of Papuan students in the central city of Surabaya.

The uprisings, which left dozens dead, sparked renewed calls for Papua’s independence from Indonesia, which took over the mineral-rich region in the 1960s. A Papuan vote to remain in the archipelago nation, held during that period, was widely viewed as a sham.

The panel said Tabuni used the anti-racism protests as cover to push for self-rule through street demonstrations and social media campaigns.

“If his acts are left unpunished then it will become a threat to the integrity of the country,” said presiding judge Sutarmo, who like many Indonesians goes by one name.

Tabuni’s sentence — handed down over video link because of social distancing prompted by coronavirus — was far lower than the 17 years sought by prosecutors, but the activist said he would consider an appeal.

“From the bottom of my heart I am not guilty,” he told reporters.

Two student activists were also jailed, for 10 months each, after taking part in last year’s demonstrations, with the sentences for another four Papuan defendants expected late yesterday.

The hearing was moved from Papua to Balikpapan, on Indonesia’s side of Borneo island, over what the government described as security concerns.

“These Papuan activists and students should not stay even a single night behind bars,” said Andreas Harsono, senior Indonesia researcher at Human Rights Watch.

“They were protesting against racism, but are convicted of treason,” he added.

Rights groups say Jakarta has increasingly turned to treason laws in a bid to stifle dissent, with more than 50 Papuan activists and about a dozen critics of the government facing charges after last year’s demonstrations.

Among them are activists accused of raising Papua’s independence flag, which is banned in the world’s third-biggest democracy.

The protests underscored simmering anger over racism against the region’s ethnically Melanesian population. Most Papuans are Christians who have few cultural links to Muslim-majority Indonesia. Indonesia’s security forces have also long been accused of rights abuses against civilians during a decades-long insurgency.

Small demonstrations were held this week, with #PapuanLivesMatter trending on Indonesian social media, taking a cue from the global surge in the #BlackLivesMatter movement following the killing of George Floyd by a white police officer in the United States. — AFP