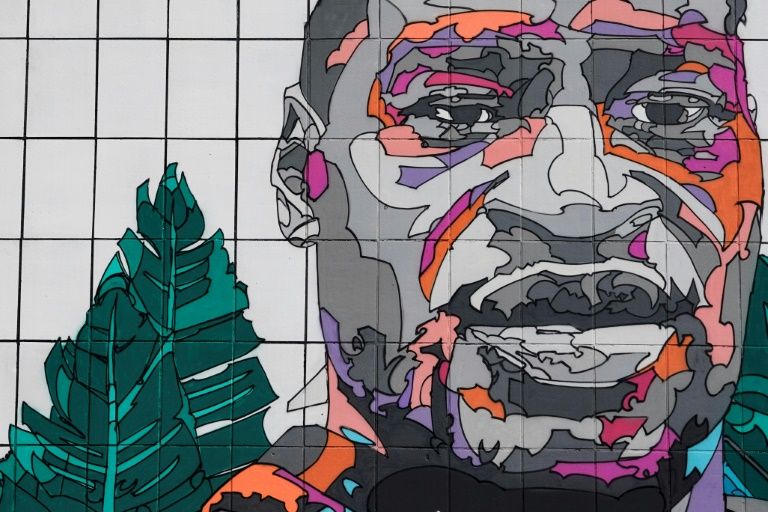 George Floyd’s killing at the hands of US police has fulled a global uproar over racism and police brutality. AFP Photo

GENEVA: The UN’s top human rights body on Friday condemned discriminatory police brutality and demanded a report on “systemic racism”, but rights groups accused Washington of wielding pressure to strip out any mention of the United States in the resolution.

The UN Human Rights Council’s 47 members approved by consensus a revised resolution, which was initially presented by African countries for an urgent council debate, called following the death of George Floyd in US police custody.

Floyd’s killing on May 25, after a white Minneapolis police officer — since charged with murder — pressed a knee on his neck for nearly nine minutes, fuelled a national and global uproar over racism and police brutality.

An initially strongly-worded text proposed earlier this week had called for a high-level international investigation into police violence against people of African descent in the United States.

But it was watered down in recent days, first to remove the call for an international probe, and finally to strip away any mention of the United States.

This sparked outrage from rights groups, which accused Washington and its allies of lobbying heavily to revise the text.

Burkina Faso’s ambassador, who presented the resolution on behalf of the African group, acknowledged Friday that “numerous concessions” had been made to “guarantee a consensus” on the text.

It adds that the report should especially pay attention to “those incidents that resulted in the death of George Floyd and other Africans and of people of African descent, to contribute to accountability and redress for victims”.

It also calls on the rights chief to “examine government responses to antiracism peaceful process peaceful protests, including the alleged use of excessive force against protesters, bystanders and journalists”.

The United States, which had complained of being singled out in the initial text, withdrew from the council in 2018 and was not present on Friday.

But a number of its allies took the floor to hail the changes made to the text, stressing that racism was a global issue.

Australia’s representative, for instance, celebrated the “acknowledgement that this problem does not belong to any one country. It is a problem around the world”.

Rights groups however slammed the revision.

“By bullying other countries to water down what would have been an historic resolution and exempting itself from international investigation, the United States is yet again turning its back on victims of police violence, and black people,” said Jamil Dakwar, head of the American Civil Liberties Union’s human rights division.

Before the final revision was circulated, Human Rights Watch had said there was pressure to “strip all references to the United States from the resolution”.

Doing so, HRW Geneva chief John Fisher warned, “would transform it into an ‘all lives matter’ text, and risk making it so vague as to be meaningless”.

The urgent UN debate began Wednesday with an impassioned speech via video link by Floyd’s brother Philonise, who said his brother had been “tortured to death” as witnesses begged the officer to stop.

He urged the council to establish an independent international commission of inquiry — one of the UN’s highest-level probes — as called for in the initial version of the draft resolution.

While there will be no international probe into the situation in the United States, Bachelet has been called upon to present her report on “systemic racism” globally in a year’s time. – AFP