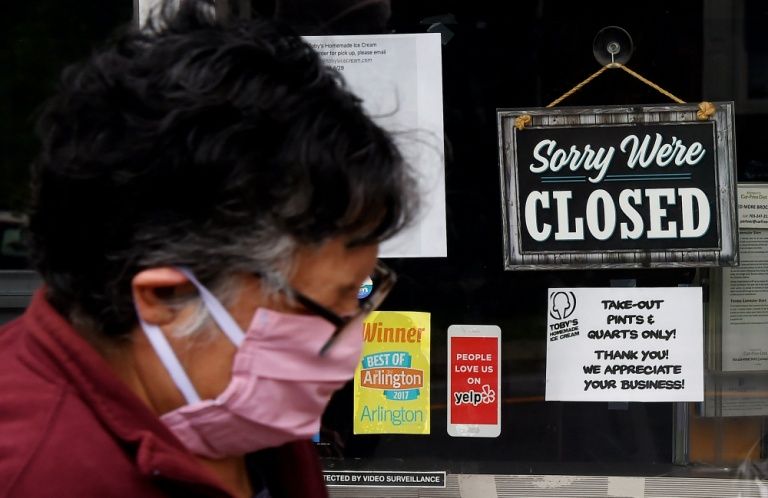 Another 1.5 million people filed new claims for jobless benefits in the United States last week, barely changed from the prior week and indicating that layoffs continue. AFP Photo

WASHINGTON: Layoffs caused by the coronavirus pandemic in the United States have passed 45.7 million, raising fears that despite some positive signs, the economy faces a halting recovery from the downturn.

Another 1.5 million US workers filed new claims for unemployment benefits last week, the Labor Department said Thursday, a decrease of only 58,000 from the prior week and higher overall than analysts expected.

An additional 760,526 filed claims under a program for those who would not normally be eligible for benefits, while the insured unemployment rate showing people still receiving aid was unchanged as of the week ended June 6 at 14.1 percent, with 20.5 million people getting benefits.

“Based on this side of the firing and hiring equation, labor market improvement is muted,” tweeted Mohamed A. El-Erian, chief economic adviser at Allianz.

The world’s largest economy has seen a protacted downturn since businesses began closing in mid-March to stop the spread of the coronavirus, with the unemployment rate climbing to 13.3 percent in May and millions of layoffs reported each week.

In an interview with The Wall Street Journal, President Donald Trump reiterated his expectation that the economy would recover by the time voters decide whether to give him a second term.

“We will have created a lot of jobs prior to November 3,” Trump told the newspaper on Wednesday. “I expect a tremendous increase in GDP. And we’ll be heading for the top. We’ll be back.”

The wave of jobless claims peaked in late March and has been decreasing ever since, but remains well above any single week reported during the global financial crisis in 2008, even as states move to reopen businesses and get consumers spending again.

Those efforts have paid off in sectors such as retail sales, which the Commerce Department said spiked 17.7 percent in May, nearly double the gain analysts expected, while other data has shown growing optimism among consumers and businesses.

Wall Street has also recovered much of its losses for the year after plunging as the virus arrived, though markets were mixed on Thursday morning, with traders holding back as they weighed the claims data.

“It’s not clear why claims are still so high; is it the initial shock still working its way up through businesses away from the consumer-facing jobs lost in the first wave, or is it businesses which thought they could survive now throwing in the towel, or both?” said Ian Shepherdson of Pantheon Macroeconomics.

“Either way, these are disappointing numbers and serve to emphasize that a full recovery is going to take a long time.”

In congressional testimony earlier in the week, Federal Reserve Chair Jerome Powell said that unless consumers feel confident COVID-19 has been defeated, “a full recovery is unlikely.”

“The levels of output and employment remain far below their pre-pandemic levels, and significant uncertainty remains about the timing and strength of the recovery,” Powell told the Senate Banking Committee.

The central bank chief has predicted the contraction of GDP in the April-June quarter “is likely to be the most severe on record,” and called for more support to the economy.

But the Fed can only lend, not spend, and it will be up to Congress to decide whether to act ahead of the expiration of parts of the $2.2 trillion CARES Act stimulus package in the coming weeks.

The United States has seen the world’s worst coronavirus outbreak with more than 117,000 deaths and 2.1 million cases diagnosed.

The epicenter has shifted from New York and states in the northeast to the south and west of the country. – AFP